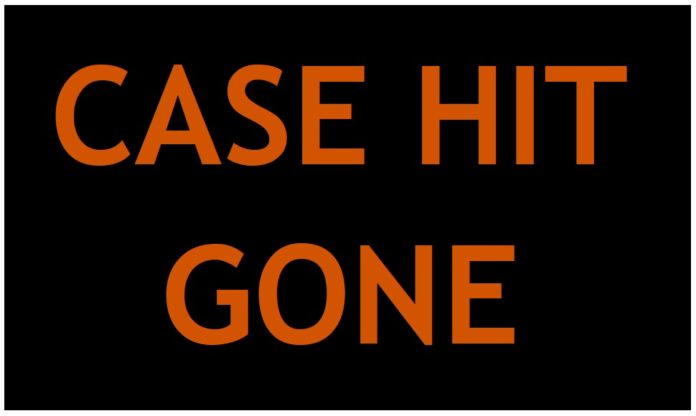 Welcome to the first edition of Case Hit Gone, a monthly hobby news blog post discussing some of the big topics in the sports card collecting community. In this edition we will talk about the biggest name in the hobby at the moment, Shohei Ohtani, and the hype surrounding his first Topps autograph cards. It wouldn’t be a complete sports card news blog if the recent record sale of a 1952 Mickey Mantle PSA 9 didn’t make it in! This is coupled with a preview of some future sales analytics that will start appearing in next month’s edition highlighting some key trends for hot Rookie cards and overall values of selected superstars. This month we take a look at the rise, fall and rise of Ben Simmons Silver Prizm RCs.

Enough of an introduction, let’s dive on into the latest hobby news! 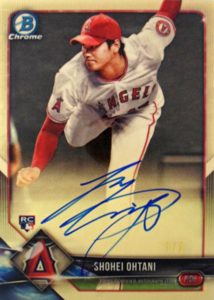 One of the most hyped players to make his way into the baseball card collecting world in some time, Japanese baseball two-way superstar (pitcher and pinch hitter) Shohei Ohtani has set the secondary market alight! The chase is on for his early autographs with one of the first being that out of Topps Heritage Baseball, and more recently is his Bowman Chrome autograph which despite and initial flurry of high priced sales have settled into a more reasonable range a couple of weeks after the set released. For those that didn’t hear, Blowoutcards have indicated they are willing to offer whoever hits the 1/1 superfractor auto a lazy $60,000US!! Only catch is that it needs to be graded by Beckett to a BGS 9.5 and delivered to Blowoutcards by 11 May 18. So far I haven’t seen it appear so it looks like that offer may expire. Either way see here for full details.

Prices aside the reason for the hype behind his cards come from his huge Japanese fan base and the outstanding start he has had to his rookie MLB season. His prowess as a pitcher is also exceptional and so far he has lived up to expectations, including his fast ball that can clock over the impressive 100 mph. Based on these early showings, it’s clear that collectors are trying to get in early in the hope he becomes the next big star in baseball!

See below for the Top 25 eBay sales of his cards over the past 3 months: 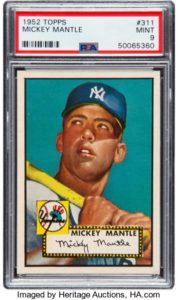 Whilst the sale fell slight short of the all time record of $3.12 million set by the sale of a 1909-11 Honus Wagner T206 tobacco card, the PSA 9 1952 Mickey Mantle RC did exceptionally well by hitting the $2.88 million dollar mark, making it the second highest sale of a trading card on record.

Being one of only 5 graded this high (population (POP) 5) is what makes this card of arguably the one of the best New York Yankees baseball player of all time so highly sought after. Baseball is America’s national pastime and collecting iconic pieces of its history like this is considered akin to collecting great pieces of art by some people. Regardless of the motivations behind it, there’s no doubt this is something that will be a great investment for the new owner.

In a future edition of Case Hit Gone we will look at a list of the biggest ever card sales on record, as well as some other unique pieces that have changed hands over the recent months. 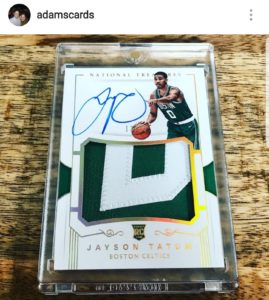 Released on the 5th of May 2018, there’s no doubt this product is commanding a lot of attention. With one of the most hyped rookie classes in years, the demand for cases has seen the pre-sale prices sky-rocket to rarely seen before levels. The results that flow on to group break spots has been significant, with some teams doubling in price (sometimes more) between the first cases listed and the more recent listings.

As is the case every year with NT, the Rookie Patch Autos (RPAs) are the sought after entities in this release, with the first few Lonzo Ball true RPAs (#/99) fetching $2500-3000, Jason Tatum doesn’t have a true auction sale yet but sits at $2,500 with 3 days to go, a Kuzma with a weak patch can be bought for $3000, but the biggest selling RPA is definitely Donovan Mitchell’s which is going for $5000+. The release of the Panini First Off The Line (FOTL) National Treasures (17-18) Basketball saw the introduction of the limited edition RPA /15 which has also commanded a lot of value on the secondary market as well. These FOTL boxes old out in around 5 minutes (and we didn’t see as much of the agonising server crashes as previously experienced) when they went live last Friday and are selling for $1700-1800US on eBay. Congratulations to those who got one and busted something nice like the Jason Tatum Limited Edition RPA /15 hit by Adamscards on Instagram.

A few images of the big hits from the release that are already live can be seen below with a lot of good cards still tucked away in cases yet to be busted.

The Checklist, Team Hits and Player Hits are now live on the site so head here if you want to know more!

In this first edition of Case Hit Gone, we will look at a the sales trends for the highly sought after Ben Simmons Silver Prizm RC. I’ve chosen this card as it is in a unique position due to the lack of Simmons Rookie autos and Patches due to his exclusive contract with Upper Deck. As a result his Silver Prizm RCs have become one of his cornerstone cards along with his National Treasures and Flawless base cards. Over the past year I’ve been tracking the sales of these cards (aside from a month or so late last year where I had some data issues) and it paints an interesting picture as shown below. I’ve split out the sales into raw, BGS 9, 9.5 & 10 as well as PSA 9 & 10. This allows for a clearer understanding of the benefits a graded card provides compared to a raw version in terms of sales prices. All up the below data consists of around 400 individual sales that I have records for an with such a large sample size it is possible to see a few key trends and make some definitive conclusions. 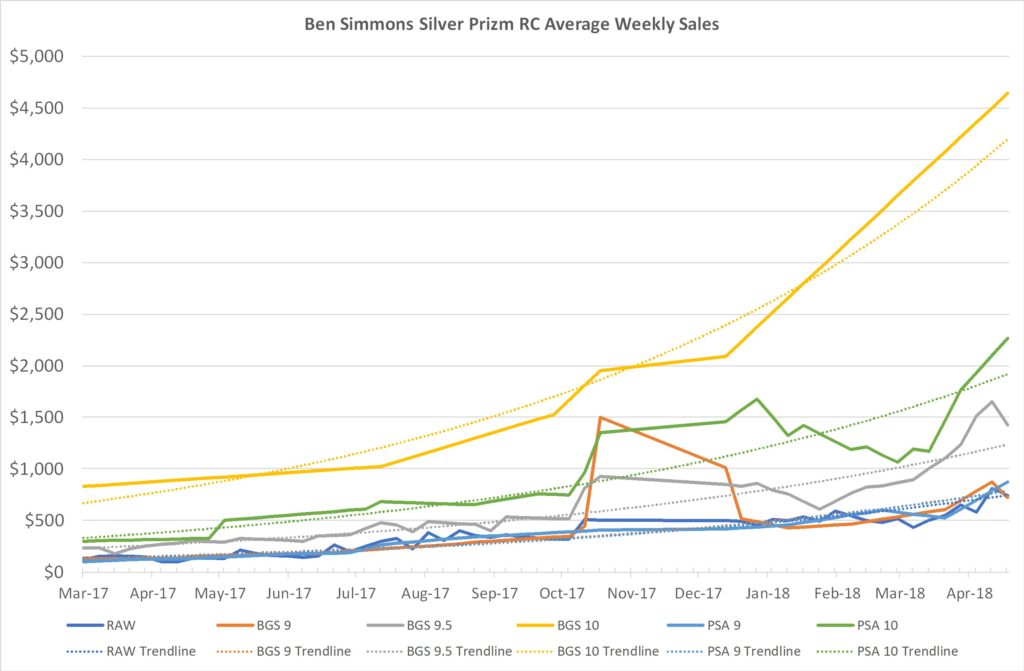 Whilst the peaks and troughs here are well known to most collectors it is interesting to see it all on one page. Firstly the common analogy used by collectors that a BGS 9 is equivalent to a raw card holds true for this one, with average weekly sales almost tracking along identically. Interestingly the same goes for PSA 9 as well, with that tracking almost in an identical manner to the raw and BGS 9 sales.

We can also see the massive spike in sales at the start of this season when he began to show the unique court vision and skills that he was so widely renowned for pre-draft. After the initial hype died down we saw a steady price for a while but as the season continued, especially post All Star break, his prices have sky-rocketed again. As you can see a recent sale of a BGS 10 hit $4.5K US!

The other interesting point is the general trend-lines for each category which shows the steady increase in value over the past year and is in indicator for future sales. That being said nothing is guaranteed in this hobby so always do your own research and make a decision based on the most recent information available!

Despite some lesser performances during this playoff run, there’s no doubt his Silver Prizm RC will continue to be one of his most highly sought after card. His potential appears to be endless (the rest of the NBA is in trouble if he develops a jump shot and 3-pointer) so keep and eye out for future updates on how his sales are trending.

That’s it for this inagrual edition of Case Hit Gone, I hope you found it somewhat enlightening. As always let me know what you think and if you have any suggestions about what you would like to see in future editions. Next month we will look at a summary of 17-18 National Treasures Basketball RPAs and some other key cards from Baseball and Football.

Until then I hope you all get a Case Hit! 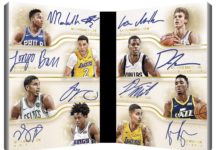 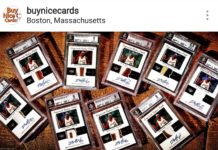